One of our all-time favourite YouTubers is the travelling Englishman, Bald and Bankrupt. He is based in Belarus and travels widely in Russia and the ex-Soviet republics. His avoidance of tourist traps and his openness to local people and unpredictability is what is particularly endearing about his videos.

Also his ability to speak fluent Russian and some Hindi is also impressive. Indeed, around two years ago he made a video talking about how he mastered Russian – which incidentally is a really difficult language for English speakers to learn.

Here is the episode:

In his own words:

“You might not believe me but I am testament to the fact that if you want to learn Russian, throw away the grammar books and you’ll make massive progress very quickly. Grammar holds you back in the beginning of your language journey so hold off until you are much further down the road”.

And instead of getting bogged down in the grammar, what he does recommend is learning vocabulary. And then getting out there and using the language by just stringing words together, grammatical mistakes be dammed. The most important thing was to not be afraid to make mistakes but just use the language as much as possible and knowing lots of words facilitates this. He argues that the grammar will come as you listen to what people are saying back to you. In fact native-speakers tend to instinctively correct learners of their language – appreciating the effort and trying to be helpful. I think that that is something we instinctively do with children when they are learning to talk.

I think this is a very interesting and while of course knowing as many words in the language you are learning is helpful, this approach will only work if you are in a position to get out there and use the language functionally very frequently. Not all people are in this position and text-book learning including studying grammar might be the only way forward.

DECLAN FLASHCARDS for iOS and Android

If you are interested in a fun and effective way to learn foreign language vocabulary, please give Declan FlashCards a try.

Give it a try and download here : iPhone and iPad and Android.

Select from 13 languages and start learning 1000s of words with Declan FlashCards for iPhone and iPad. FREE download from the Apple AppStore here : https://apps.apple.com/app/id1530034734

Declan Software started over 20 years ago and after a hiatus of several years we are back with our new app – Declan FlashCards for iPhone and iPad.

In this blog we will discuss how you can best use our apps to help you learn languages. We will also talk about languages more generally and techniques for how accelerate your language learning. 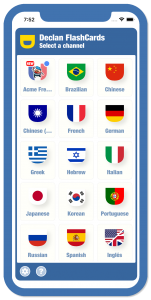